WWA Double World Champion! Super stoked to get the gold in both Pro Women Traditional & Features Division.
After being a bit unlucky and struggling with some injuries in the past few weeks I‘m super happy to be back on track and finishing off 2021 strong.
Thanks to Orlando Watersports Complex for hosting and The World Wake Association for organizing this event and providing equal prize money for women and men. Also thanks to all judges putting in a lot of work, it was an absolutely well-rounded event!
Big thanks to everyone who supports me, fans, family, friends & sponsors
Fotos shot with Panasonic Deutschland Panasonic Lumix Deutschland #gh5s by Wilfried Rick
#wakeparkworlds #thewwa #goridegocompete #competeinwake 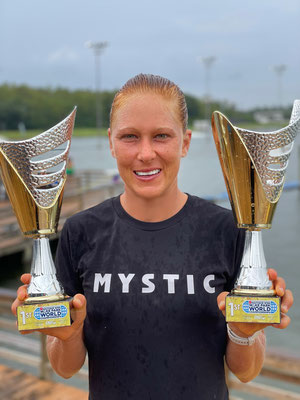 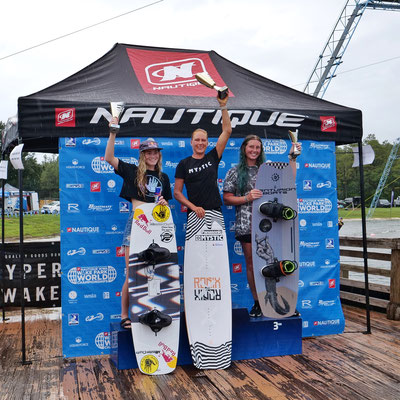 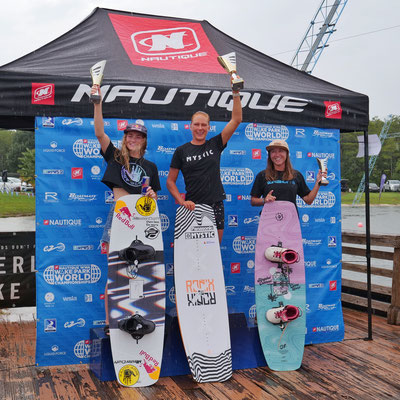 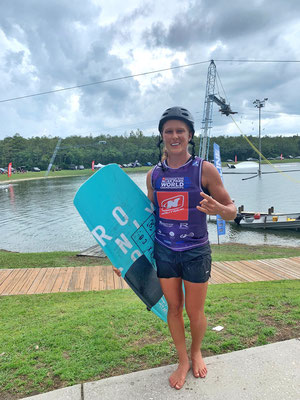 Wow…super proud to be a World Record holder! I set the female Guinness World Records for „Most inverts while wakeboarding in one minute“! I did 21 inverts in 60 seconds at Sunset Wake Park in Brazil.
Big thanks to everyone who was involved and helped out to make it official.
Officially amazing!
Shot by Atila Prata & Wilfried Rick with Panasonic Deutschland Panasonic Lumix Deutschland #gh5s 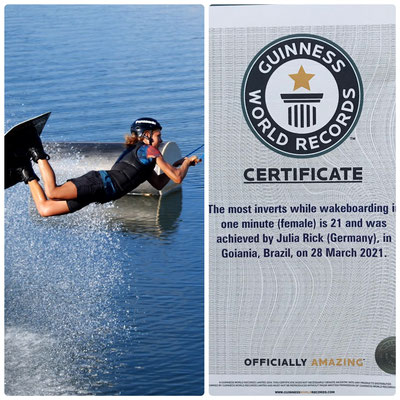 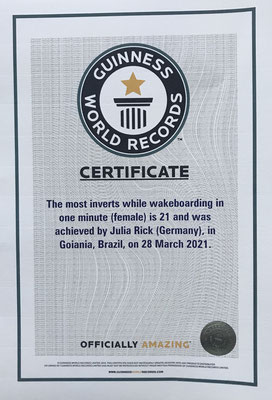 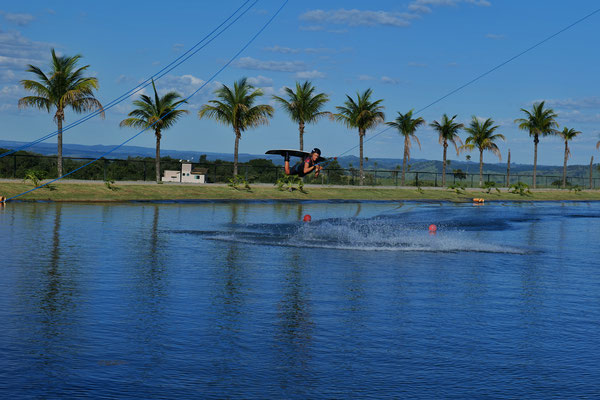 The IWWF (International Waterski and Wakeboarden Federation) awarded Julia Rick as „Female Wakeboard Cable Rider Of The Decade (2010-2019)”. This award is a special accomplishment for Julia. It rewards her various victories throughout the years and her function as female role model.

On winning the latest 2018 World Championships in Argentina Julia said:

How do you rate this victory vs other victories?

It definitely is an important victory because the IWWF Worlds only takes place every two years. Furthermore, I became IWWF World Champion for the 3rd time (2012 Junior, 2016 & 18 Open ladies)!
Anything you want to say to whoever is out there dreaming with being cable wakeboarding world champion?

I think the most important thing is that you really love what you do and to be passionate about it! If you really want something and have fun doing it, you will reach your goals.

We cannot wait to see what the next decade brings for Julia, and love seeing all of her social media posts pushing our sport more and more.
Congratulations Julia - this is such a well-deserved award.“

First Woman ever to land a KGB 540

During her stay at Sunset Wakepark in Brasil Julia Rick became the first female ever to land a KGB 540. This is a World’s first and one more trick she lands as the only woman. She published the trick in a video edit filmed with the Panasonic Lumix GH5S by Wilfried Rick.

On her Facebook fan page it has reached already around 70.000 views.

Super pumped to have won the IWWF international online competition for the 4th time in a row!
Congrats to the other riders! Check out my Front Blind Mobe and Roll to blind
Filmed with Panasonic Lumix GH5s

Champion of the German Wakeboard League

First woman ever to land a Switch Toeside Backside 900

Super stoked to be the first woman ever to land a SWITCH Toeside Backside 900!!🤘💃

Music: Break Through [No Copyright] by Was Here*

Thanks to everyone who supports me!!

Special Thanks to Atila, Mateus & crew at Sunset Wake Park

Beyond stoked right now... Today I got DOUBLE WORLD CHAMPION again After a crazy final I defended my title in „Pro Women Features only“ after winning the title in „Traditional“ yesterday
I even landed a clean toeside Backside 900 in the final today 🙌
Counting all my world titles (IWWF and The World Wake Association ) it was my 10th World Champion title (with „Features only“ even 14).
What a special day... still have to calm down and realize everything what happened today
Congrats to the other winners, everyone killed it!
Thanks to everyone who supports me, fans, family and friends 🙏🏼
Thanks to Mayan Water Complex for hosting and The WWA for organizing this event, you did an awesome job👏 30 Years of Wake have been amazing and this event was definitely one for the books😊 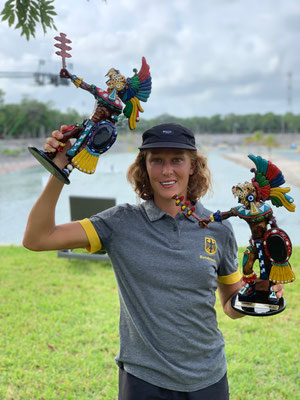 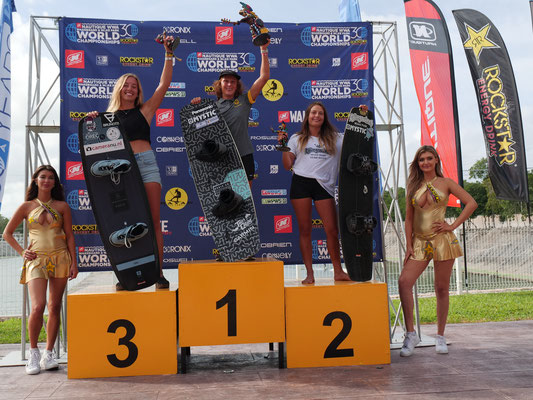 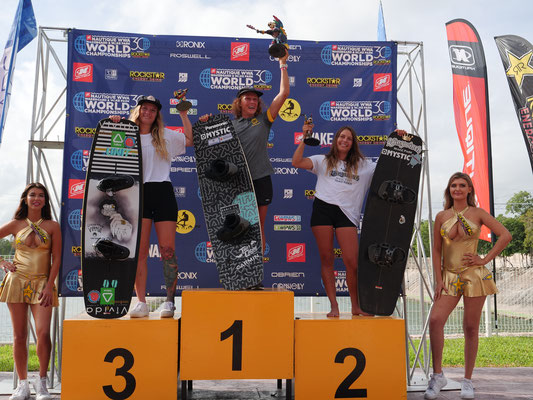 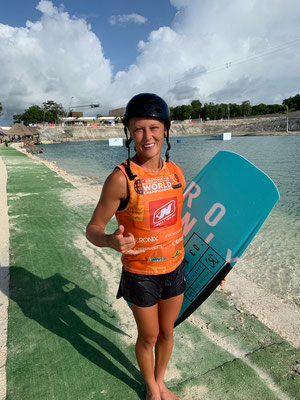 European Champion for the 7th time in a row

Got European Champion for the 7th time in a row (2013-2019) Super happy to win this title over and over again!

Also got the gold medal 🏅 with the german team!! Congrats to all other winners, especially Max Milde for taking the win in the Open Men's division!🙌 Big thanks to the whole crew of Wake Zone Stawiki, you did an amazing job organizing this event!! 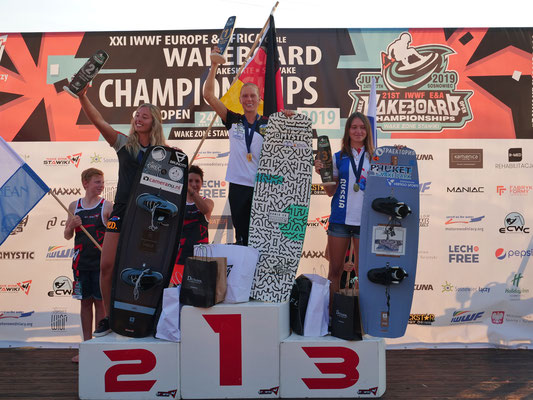 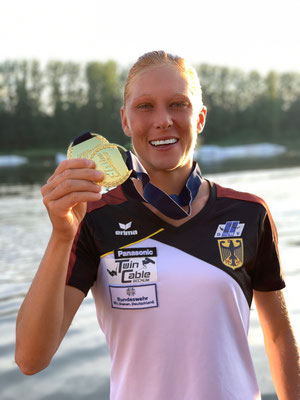 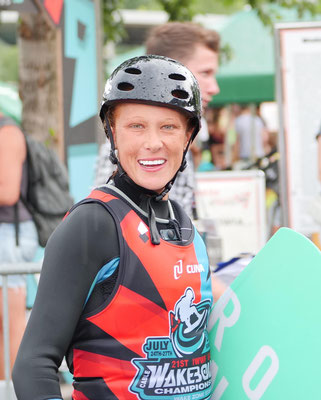 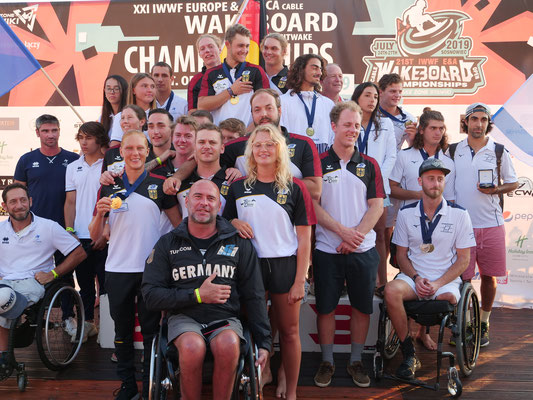 This weekend I won the famous „Munich MASH“ event 2019! For the first time ever, women participated in their own competition in front of a huge crowd of more than 10.000 spectators.
More than 80,000 people came into the Munich Olympic Park from 28.-30.06. to watch three different kinds of Action sports (BMX, Skate and Wakeboarding).
Official Press Release: https://www.munich-mash.com/2019/en/news/83/80-000-visitors-celebrate-mash-2019.html
"She came to win – and she certainly didn’t disappoint. Germany‘s Julia Rick won the first Wakeboard Park Women‘s Contest at the Olympic Park in front of 10,000 fans. Things remained exciting right up until the end, with America’s Anna Nikstad leading the way in the standings until Rick’s final run. The nine-time world champion rose to the challenge and threw down a Toeside Backside 720 on the big kicker, combining this banger trick with a clean run over the other obstacles to push Anna Nikstad off top spot. “I am so happy to have won here. The contest here is really special and the park is technical and challenging to ride,” commented the 26 year-old. Third spot went to Maryh Rougier (France).“
Here you can watch the full competition (Live Streamed on Red Bull TV, Pro Sieben Fun and Ran): https://www.redbull.com/int-en/events/AP-1Z8TAEXVS1W12/live/AP-1Z8K4CTP12511
Women’s final starts around 1:09 h . 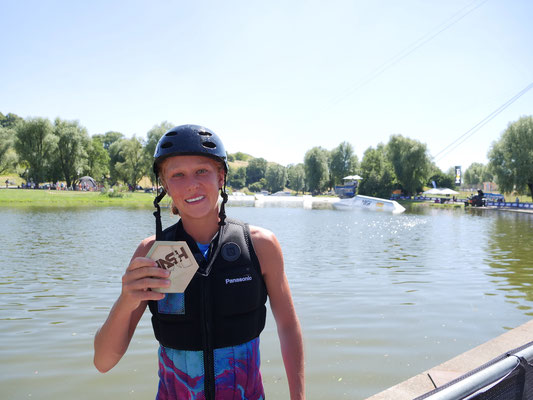 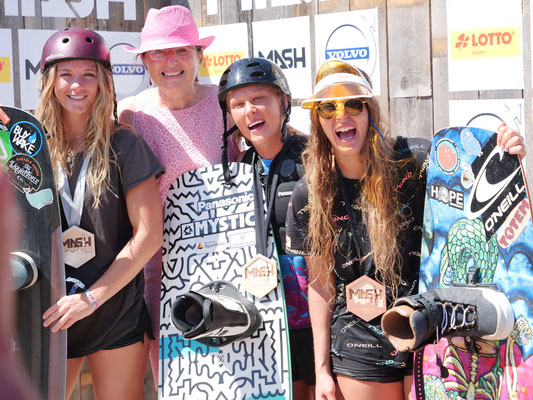 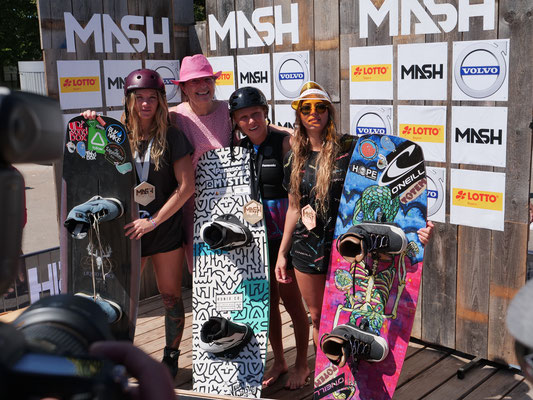 This weekend I won the final Stop of the LF US Park Pro at Terminus Wake Park in Atlanta, Georgia! The event took place from 21.-22. June.  With this win I also became overall winner of the whole series after already winning the first stop at Wake Island Park in Sacramento, California (07.-08. June). (Recap clip: Recap-Clip: https://www.youtube.com/watch?v=VbvdjFFdtVA)
Results of the final stop: http://thewakeboardsite.com/competitions19/parkpro3.html 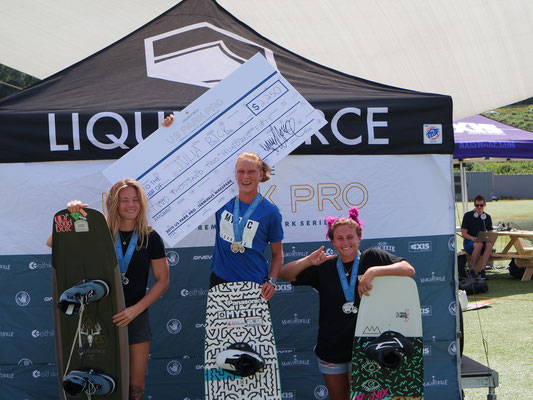 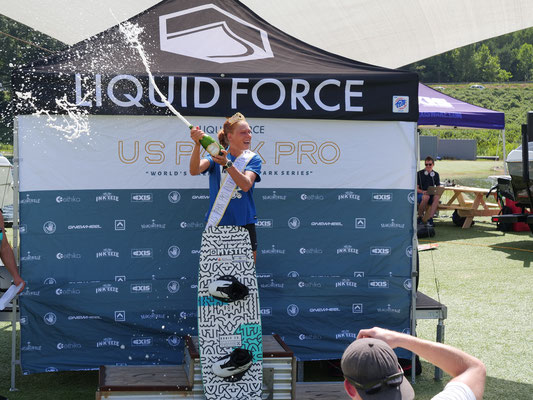 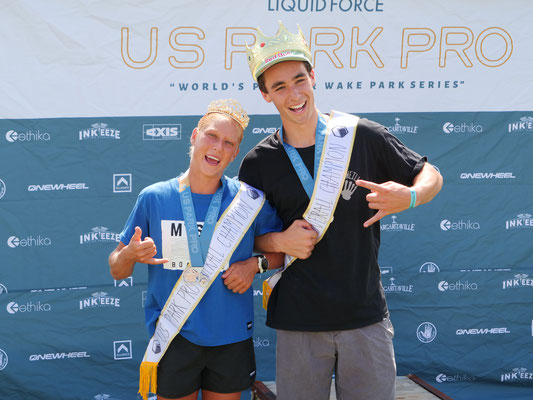 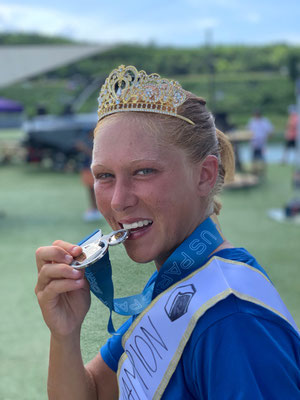 Warm Up for Wakeboarding

Couple of warm up exercises for Wakeboarding! 💪You don’t have to do all of these to be ready to hit the water but picking a few of them are a good warm-up routine!
Let me know in the comments if this video was helpful for you!! Do you want more of this content? Feel free to ask if you have any questions!!

Thanks again for all your love and support!!🤩🙏 If you haven't seen it yet, check out my winning run from the IWWF World Championships at Pampa Cablepark last weekend!! Here you can watch the full finals again : https://www.youtube.com/watch?v=phQ3b... Video source 🎥 : IWWF CableWakeboard.net 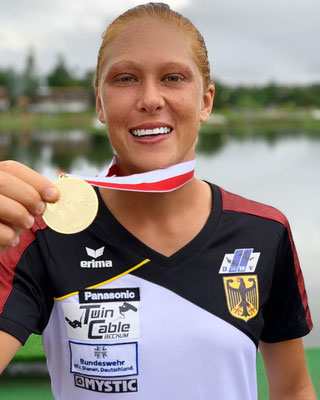 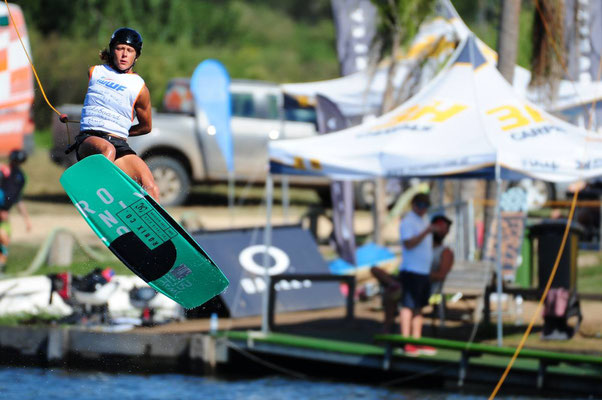 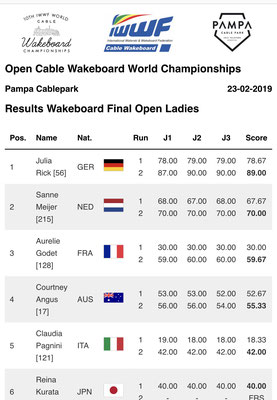 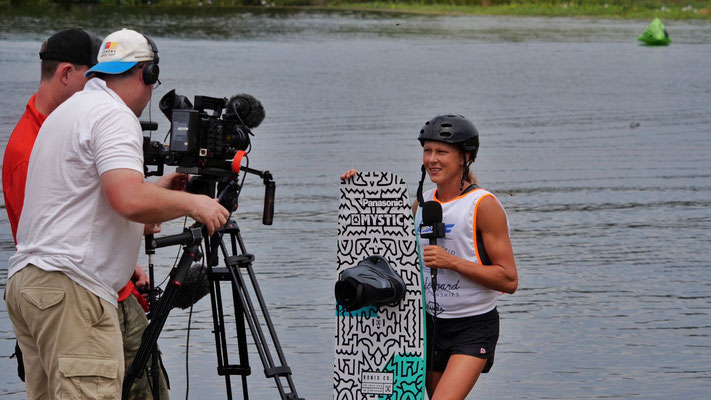 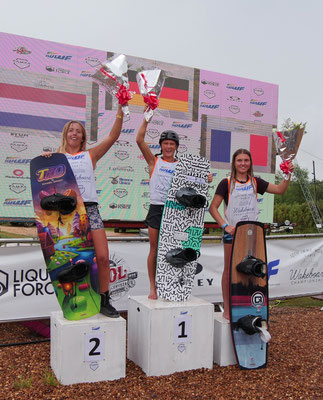 Also became the first female ever to land a Backside 900 in a competition!! Super stoked and over the moon right now!
I think there would have been no better way to finish off my contest season 2018!! The last weeks have been crazy busy winning the IWWF World Cup in Shanghai, Plastic Playground in Bali and finally the World Championships in Mexico!! Now it’s time to go home! Congrats to all the winners and thanks to the organizers for hosting this event!!

Special thanks to all the people who support me!!

Wooowww what a day! Just won the final stop of the Plastic Playground World Series at Bali Wake Park & Aqualand
Also became OVERALL CHAMPION of the whole world tour!! Super stoked ! Congrats to the other winners and thanks to the organisers

Thanks to everyone who supports me

Yeeeaaahhh!!! Just won the IWWF WORLD CUP in Shanghai for the 3rd time in a row! Super happy to take home the gold! Thanks for organizing this event and making history with equal prize money for men and women! Congrats to all winners !
Now it’s time to head back to Bali for the final tour stop of Plastic Playground at Bali Wake Park & Aqualand! Let’s do this

Super stoked how this turned out! Check out the video about my new 2019 Pro Model Board from Ronix Wake!

What a day!! Just got German National Champion for the 7th time in a row!!

Even more special for me: Got 3rd place in the Superfinal!! A mixed category (men & women ‼️) in which the winners from each category ride against each other (Top 8 riders)!
This was a new challenge for me riding against the boys!  Gino Wetzels and Max Milde, you killed it🤘
Furthermore I got awarded as Deutscher Wasserski & Wakeboard Verband Cable Wakeboard Rider of the Year next to Florian Weiherer
Had lots of fun today, congrats to all the winners and big thanks to TwinCable Beckum am Tuttenbrocksee for organizing this event!!

Thanks to everyone who supports me

Congrats to the other award winners!
Thanks to all people who support me!

First Woman ever to land a 1080 in Wakeboarding

I just became the first woman ever in Wakeboarding history to land a 1080. Worked so hard for this trick and finally landed a Toeside Backside 1080!!
Filmed at  International Wake Park with Panasonic Lumix GH5s by Wilfried Rick
Music by T-Mass - Ignoring My Heart (NCS Release)

On 28.05. the Garmin #BeatYesterday Magazine published a great interview with Julia Rick. Julia is Garmin Ambassador und makes herself a name also in the fitness industry.

Congrats to all other winners! Thanks for organizing this amazing event, I had a great time here in Jordan!!
Thanks to everyone who supports me, fans, friends, family and sponsors, you are awesome!!
Photo shot by Reina Kurata
#IWWFWORLDCUPJORDAN #AYLA #IWWF

Punta Cana, DR- From 17.04. to 26. april Julia Rick visited the Aquapark_DR in Punta Cana, Dominican Republic. Besides her daily training she also shot lots of photos and videos with the new Panasonic Lumix GH5s.

Furthermore the local video crew created a video clip about her stay.

Super stoked how this turned out!🙌 Proud to present you the video about the Ronix Wake 2018 Julia Rick Pro Model Board!

💃Just won the IWWF WORLD CUP for the 2nd time in a row 🇨🇳 Over the moon right now
The past few days have been crazy! First got WWA World Champion in the Philippines and then went straight to Shanghai to take home the World Cup 🇩🇪 Best feeling! Congrats to the other winners and big thanks for organizing this event
Thanks to everyone who supports me

Yeeeaaahhhhh just became WWA WORLD CHAMPION Women’s Professional for the 5th time in a row!!
Super stoked right now! Thanks to The World Wake Association and CWC (CamSur Watersports Complex)for organizing this event and congrats to the other winners!
However, not much time to celebrate because tomorrow morning I’m going to head to Shanghai for the IWWF World Cup!!
Thanks to all the people who support me, family, friends, fans, sponsors, Thank YOU ALL

Happy to announce the partnership with IronMaxx Nutrition! Their products help me to keep my body balanced and fit and to optimize my potential as an athlete! Proud to be a part of Team IronMaxx among other top athletes!
Check out my profile on the website: https://www.ironmaxx.de/de/teams-sportler/ and their awesome products!

WOW!!! 🎉🎉🎉 Finally I got IWWF WORLD CHAMPION in the Open Ladies division! After becoming WWA WORLD CHAMPION two weeks ago it’s the first time ever a rider gets the title in both IWWF and WWA in the same year!!🤘 So stoked to accomplish this goal and to finish off a great competition season 2016 !🙌

I had the best time in Mexico meeting a lot of new friends and having a blast on and off the water! Congrats to all the winners and thanks for organizing this event!
Big thanks to all my supporters, family, friends and sponsors, I hope you enjoyed watching the live stream

Yeeewww 🎉🎉🎉Just got WWA WORLD CHAMPION Pro Women for the 4th time in a row🤘🤘🤘
Super pumped and stoked to take the DOUBLE win in Traditional and Features division- again!!
Big thanks to The World Wake Association and CWC (CamSur Watersports Complex) for hosting this event and congrats to all the winners!
Thanks to all my supporters, family, friends and sponsors🙌